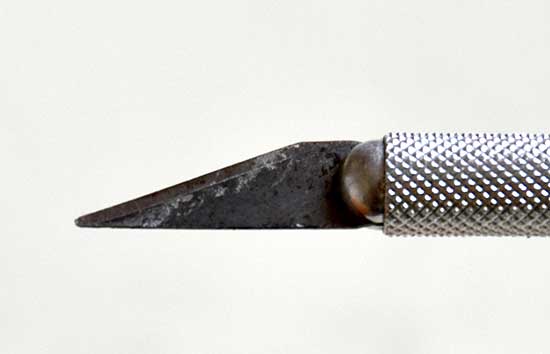 Simply stab the tip of the x-acto knife into the pentalobe screw, and carefully twist: 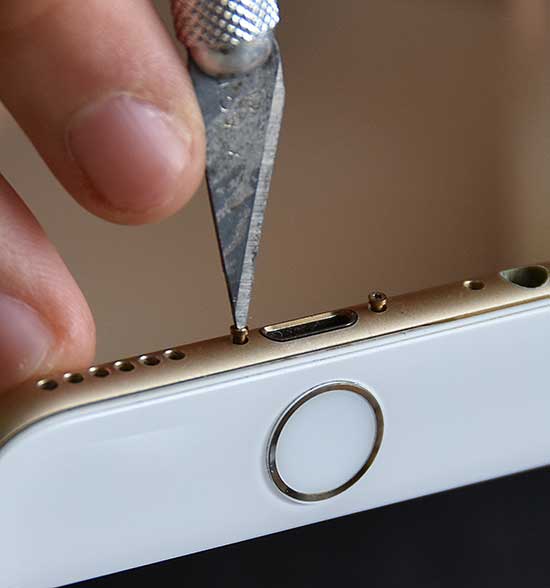 The screws are so tiny that there isn’t much friction, so even though the knife blade isn’t a perfect fit, I’ve never stripped a screw. The same method works on small Torx and Philips screws. I’ve used this technique on many different devices over the years.

In my previous article, I described how to restore contacts from a backup to an iPhone.  The infuriating thing about restoring AddressBook.sqlitedb to an iPhone is that one can’t just drop in a replacement file, because after you reboot, the new file gets overwritten with an empty one.  I traced the overwriting of the addressbook to a process called dataaccessd.  This process can’t be killed easily, because launchd will automatically restart it if it dies.  After some testing, I have now devised a procedure which is simpler than the one described in my previous article:

This procedure assumes that you have already obtained a copy of AddressBook.sqlitedb which contains the contacts you want to restore.

1. Using iFunBox, navigate to Raw File System/Library/LaunchDaemons and copy com.apple.AddressBook.plist and com.apple.dataaccess.dataaccessd.plist to your computer.

3. Power off and restart your iPhone

4. Using iFunBox, copy your AddressBook.sqlitedb into the iPhone at Raw File System/var/mobile/Library/AddressBook

5. Using iFunBox, copy the com.apple.AddressBook.plist and com.apple.dataaccess.dataaccessd.plist from your computer back to the Raw File System/Library/LaunchDaemons folder in your iPhone.

6. Power off and restart the iPhone, and enjoy your restored contacts.

How to Restore Lost Contacts to Your iPhone

This article will tell you how to restore contacts which were lost/erased from iPhone, due to iTunes trashing them during a sync, especially after a firmware upgrade.  Restoration of your contacts is possible only if you either have an iTunes backup, or a copy of your AddressBook.sqlitedb.  It is particularly useful for people who lost their contacts after an upgrade to iOS 4.3.2, because iTunes refuses/fails to restore the contacts from a backup.  If you want to skip my rambling discourse, you can cut to the chase, and skip directly to the step-by-step instructions.

I’m always wary of updating my iPhone, because I’ve had many many problems with that over the years. But when the untethered jailbreak for iOS 4.3.2 came out this week, I felt it was time to finally upgrade from iOS 4.0.2. While the iPhone Dev Team has released redsn0w 0.9.6 rc 14, for this purpose, this tool isn’t appropriate for iPhone users who want to retain carrier unlocks, because it allows 4.3.2’s new baseband to be installed, for which there currently is no unlock.  In order to keep your phone unlocked, you need to use a tool which prevents your baseband from getting updated.  Luckily, iH8Sn0w has released Sn0wbreeze 2.6, which preserves your old baseband, thus allowing you to keep your unlock.

It’s important to make a backup of your iPhone via iTunes before doing any firmware updates.  Also, it’s a good idea to use iTunes to Transfer Purchases from your iPhone back to your computer.  For once, update went smoothly, and I thought I got off easy this time, because the phone booted right up after the Sn0wBreeze was done.  Little did I know that things are not always as they first appear.

The next step was to restore the phone from a backup that I’d made just prior to doing the firmware upgrade.  iTunes finished the restore without any complaints, but  when my phone rebooted, the first thing I noticed was that most of my apps were missing.  That was OK, I was able reinstall the apps via iTunes (and then had waste 1 hour rearranging my 200 apps back into folders).  When I went to use the phone, however, I discovered that all of my contacts were gone! Remember, I backed up my iPhone before doing the upgrade, so why didn’t %#$  iTunes restore my backed up contacts??? Ack! At this point, I knew that there was a high probability that I would be wasting a good part of my day getting my contacts back into the iPhone.

The contacts in iOS are stored in a file on the iPhone at /var/mobile/Library/AddressBook/AddressBook.sqlitedb.  The first step was to find where this file was backed up on my PC, and to see if it had my lost contacts in it.  I started searching my computer for the iTunes backup, and found a bunch of subfolders in C:\Users\<MyUserName>\AppData\Roaming\Apple Computer\MobileSync\Backup (Note: I’m using Windows 7).  Sure enough, there was a folder named 905279ef2efbc76bc402c0e411fc356d75ed95b0 with a timestamp around the time that I made the last backup.  Inside the folder are multitudes of files with hexadecimal filenames, as well as some .plist and .mdbx files.  Manifest.mbdb appears to be a a cross reference of the filenames to their path on the iPhone, but I didn’t want to waste time trying to find a program to decode it, so I simply opened up a Command Prompt, and grepped for a string that is unique to AddressBook.sqlitedb:

Bingo!  I opened up 31bb7ba8914766d4ba40d6dfb6113c8b614be442 in GnuEmacs, and sure enough, it was an sqlite database, contained my the lost contacts from address book!  I’m curious to know if the same filename always maps to AddressBook.sqlitedb, or if the filename is random, so if any readers can verify this, please leave a comment below.  OK, it should be a piece of cake to restore the file, right?  First, I tried to fool iTunes into restoring the file for me.  I created a new backup via iTunes, and copied the old 31bb7ba8914766d4ba40d6dfb6113c8b614be442 into it and then tried to restore this hacked backup.  No dice.  iTunes noticed something was different, and complained that it couldn’t restore some of the files.

OK, how about renaming 31bb7ba8914766d4ba40d6dfb6113c8b614be442 to AddressBook.sqlitedb and then copying it to the proper location on the iPhone? Should be easy, right?  I downloaded the latest version of iFunBox, a great free utility that, among its many talents, allows you to drag and drop files in and out of any directory of a jailbroken iPhone.  Using iFunBox, I navigated to /var/mobile/Library/AddressBook, copied the AddressBook.sqlitedb from my PC over the file that was already in my iPhone.  Then, I rebooted the iPhone…. Still no contacts!  When I examined the contents of the iPhone again with iFunBox, I found that my new file had been overwritten.  The problem is that when you shut down the iPhone, it writes out the contacts from RAM, overwriting your substitute AddressBook.sqlitedb before it has a chance to read it!  How annoying!

I spent the next few hours trying various methods to get around the problem.   The most straightforward way would be to get the iPhone to crash, so that it wouldn’t have the chance to overwrite my AddressBook.sqlitedb, but I couldn’t figure out how to do that.  I tried using ssh to log into the iPhone and kill -9 random processes.  That didn’t work, but in the process, I found that a program that refreshes the AddressBook.sqlitedb:  /System/Library/PrivateFrameworks/DataAccess.framework.  The problem is, if you kill it, it immediately restarts before you have a chance to sneak your new file in. So how can one prevent that damn program from overwriting the new address book??  I tried changing the file access to readonly … it changes it back to read/write.  The process runs as a user named mobile, so I tried changing the file owner from mobile to root to prevent it from overwriting the file.  It just changes the owner back to mobile!  How frustrating!  Finally, I happened on the combination that works:  change the file owner to root, and disallow all access to the file! Eureka contacts restored!

Note:  This procedure requires a jailbroken iPhone.  This topic is too complicated to discuss here, and there are many tools available, but Sn0wbreeze is what I used time time round.

1. Extract AddressBook.sqlitedb from your iTunes backup

If you already have a backup copy of AddressBook.sqlitedb from another source, skip this step. grep is a Unix command which doesn’t come with Windows.  If you don’t have a copy of it, you can download and install Gnu grep.  Find the directory containing the latest backup of your iPhone using the Windows Explorer:

Substitute your user name for USERNAME.  Find the newest subdirectory.  This is your latest backup.  Open up a Command (DOS) Prompt, and cd to the latest backup directory.  Find the file containing the backup of AddressBook.sqlitedb:

Update 2011/05/19:  I have devised a simplified procedure which supercedes the remaining steps below: Restoring AddressBook.sqlitedb to iPhone – A Simplified Procedure

Use Cydia to install OpenSSH on your iPhone.  You can find it by using Cydia’s search function.

3. ssh into your iPhone

Using an appropriate ssh client on your PC (I used PuTTY), ssh into your iPhone.  Your iPhone must be connected to the same WiFi network as your PC to do this.  To find your iPhone’s IP number,  go to Settings->Wi-Fi on the iPhone, and tap on the blue circled arrow next to the network you’re connected to.  Log in to your iPhone as user root, password alpine.

4. Copy your replacement AddressBook.sqlitedb to the iPhone

Download iFunBox and launch it.  Navigate to Raw File System->var->mobile->Library->AddressBook.  Drag and drop your replacement AddressBook.sqlitedb onto iFunBox to copy it to the iPhone.

5.  Change file owner and access of AddressBook.sqlitedb on the iPhone

Via ssh, type the following into the iPhone:

Restart your iPhone.  It will act strangely because it can’t access your AddressBook.sqlitedb.  Mine was kept cycling from the boot up screen to the lock screen over and over again, and it was impossible to operate it.  Don’t worry, you can still ssh into it.  From your PC, ssh back into the iPhone and type the following commands:

Your iPhone will reboot, and your contacts will be restored!  It’s a good idea to disable ssh when you’re done, or change the root password to prevent random hackers from hacking into your phone.