I’m working on a project which needs a touchscreen LCD. After searching eBay for a while, I noticed that many vendors were selling basically the same 3.2″ 320×240 TFT with resistive touchscreen and SD card reader. Though there were slight variations in the silkscreens, they all had the same model number – TFT_320QVT. I bought mine from digitalzone88 for $12.29. 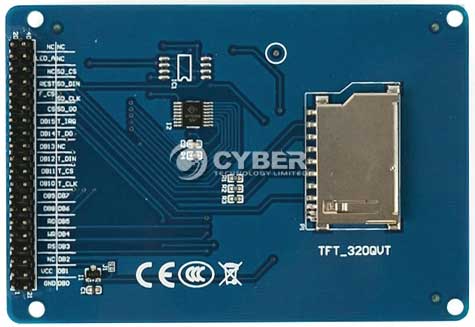 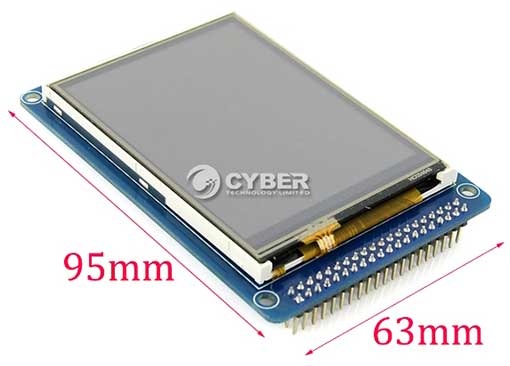 The board uses a SSD1289 LCD driver IC, and runs on 3.3V. The 3.3V voltage is incompatible with the typical Arduino, which runs at 5V (some vendors have created shields to interface it to an Arduino Mega). However, I purchased the TFT_320QVT with the intention of interfacing it to a Teensy 3.0, which runs at 3.3V. I noticed that there were not enough through-hole I/O pins on Teensy 3.0 to simultaneously interface to the LCD, touchscreen, and SD card. This necessitated the usage of the Teensy 3.0’s additional I/O pins, accessible only via solder pads on its underside:

To facilitate access to the 14 solder pads, I attached some header pins to piece of stripboard, and soldered 40AWG wire-wrap wire to between the pads and headers: 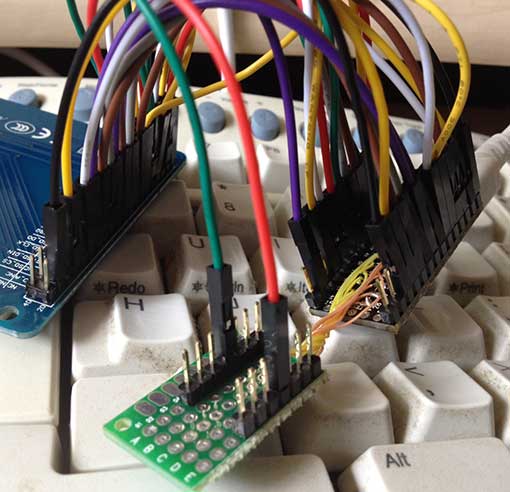 The Teensy 3.0 runs on PJRC’s specially modified version of Arduino – Teensyduino. The task was to find compatible Arduino libraries. First order of business was the LCD. I searched the web, and found that dawnmist had spent a considerable effort in modifying Henning Karlson’s UTFT to work with the Teensy 3.0. Unbeknownst to me at the time, dawnmist’s modified UTFT is actually bundled with Teensyduino!

Next, was to get the touch screen working. It turns out that the current version of Henning Karlson’s UTouch is compatible with the Teensy 3.0.

For the SD slot, I tried the version of the Arduino SD library that’s bundled with Teensyduino. Unfortunately, though the SD library works with the TFT_320QVT’s SD reader, it stops working if you instantiate a UTFT object in the sketch. I tried sdfatlib, and found that not only does it work w/ the Teensy 3.0, but it coexists fine with UTFT. The only catch I found is that it works only with SPI_HALF_SPEED. When I set it to SPI_FULL_SPEED, it stops working.

Here is the Teensy 3.0 running UTFT‘s demo sketch on the TFT_320QVT: 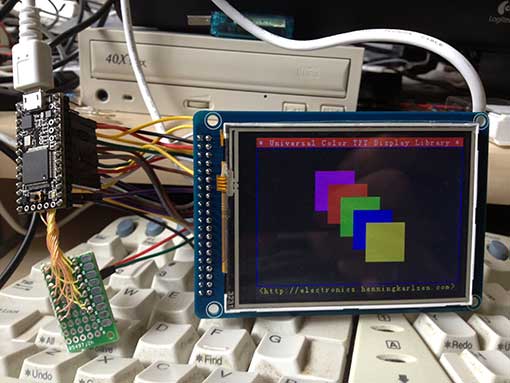 Below is the step-by-step procedure to getting the TFT_320QVT up and running with Teensy 3.0:

3. sdfatlib: Download the latest version of sdfatlib. From the Arduino IDE pull-down menu, use Sketch->Import Library->Add Library… to install the downloaded sdfatlibyyyymmdd.zip file. You can alternatively just extract the SdFat/ folder into your arduinosketchbook/libraries directory.

3. Touchscreen: The touchscreen uses 5 pins, T_DIN/T_DO,T_CS/T_CLK/T_IRQ, which can be assigned to any arbitrary free GPIO pins.

Below is a chart of my pin assignments:

I have created a sketch, UTFT_UTouch_SdFat_teensy3, that simultaneously demonstrates the LCD, touchscreen, and SD card by modifying the UTouch demo sketch. Below are the lines which are critical to configuring it to work with the above pin connections:
[code language=”c”]
#include <UTFT.h>
#include <UTouch.h>
#include <SdFat.h>

The file displays a bitmap, ade.raw, as the background. Before running the sketch, copy ade.raw to a FAT-formatted SD card, and insert it into the TFT_320QVT’s SD card slot.

You can also substitute your own bitmap file. To create a .raw file, first create a 240×320 pixel jpg, png, or GIF file. Run it through either imageconverter565.exe (bundled with UTFT) or the online ImageConverter 565 make sure to select Convert to .raw file and Target Platform Arduino (AVR). 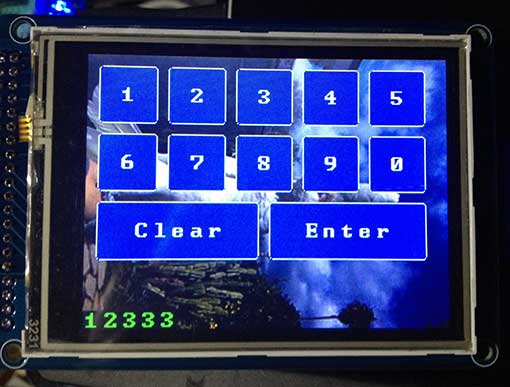 Many thanks to dawnmist, and the others who figured out how to get UTFT working with the Teensy 3.0.

Links:
I obtained much of the information I needed from these pages:
dawnmist – screen working … finally
Teensy 3.0 – driving an SSD1289 with utft

I recently backed Paul Stoffregen’s Teensy 3.0 on Kickstarter.  Paul is a contributor to the Arduino project, and is the creator of the Teensy line of AVR-based Arduino compatible boards.  Of all of the projects on Kickstarter that I have backed, the Teensy 3.0 was the by far the fastest to ship after the close of funding.

Teensy 3.0 is not currently listed on the PRJC website, as Paul is working on first fulfilling all of his Kickstarter pledges.  However, if you are lucky, you might be able to score one via this hidden URL: http://www.pjrc.com/store/teensy3.html.

Unlike the its 8-bit brethren, Teensy 3.0 is based on a 32-bit ARM Cortex-M4 MCU, specifically, Freescale’s “Kinetis” K-series PK20DX128VLH5 (first batch, subsequent batches will be the functionally equivalent MK20DX128VLH5). 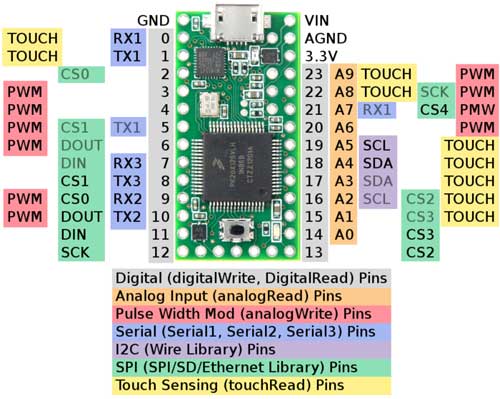 All pins have interrupt capability.

Note that that unlike Arduino, the I/O pins operate at 3.3V. This makes level-shifting a requirement if you want to interface to your existing 5V Arduino peripherals.  On the other hand, 3.3V makes it ideal as a real-time I/O expander for the Raspberry Pi.

Like its other Teensy brethren, USB device support is built in.  Software support for USB host mode is slated to be available in 2013.

My Teensy 3.0 arrived in a padded envelope via USPS.  It came packaged with a handy pinout reference card, which shows the pinouts and their usages on both the top and bottom of the board. 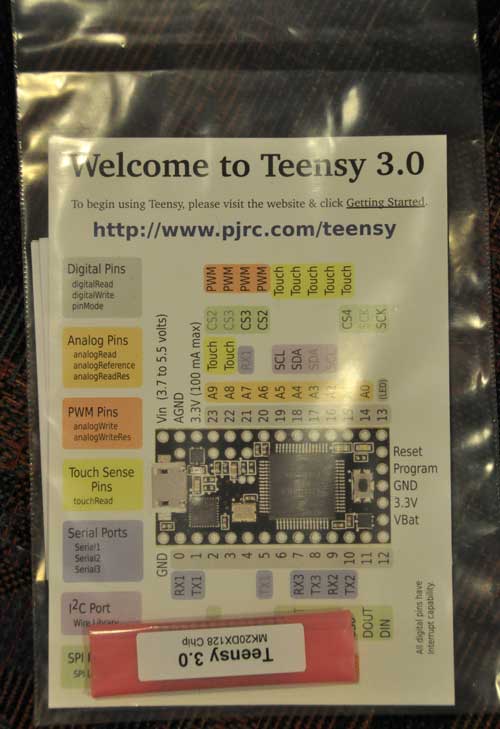 I knew the reason that it was named Teensy, but didn’t hit me exactly how teensy it was until I unpackaged it: 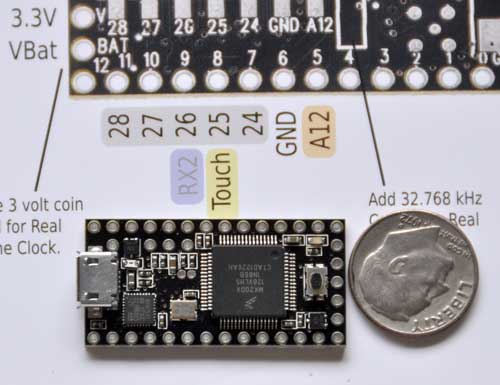 As of this writing, the the software is in its 5th beta, and is distributed as a pre-configured Arduino 1.0.1 distribution.  The download links are listed in Kickstarter Update #18: Fifth Software Update.  After launching the Arduino IDE, select Tools->Board->Teensy 3.0.  Once  Teensy 3.0 isselected, an interesting menu becomes available at Tools->CPU Speed.  The default setting is overclocked at 96MHz, which PRJC claims will run stably.  You can also select 48 or 24 MHz.

The board is pre-loaded with the standard Arduino LED blink sketch.  All I have tested so far is to verify that I am able to compile and upload the Blink sketch.  Note that in Files->Examples->Teensy, there are a many of standard Teensy example sketches, but I’m not sure how many of them are currently working with the Teensy 3.0.  The File->Examples->Teensy->Tutorial1->Blink sketch has the LED pin set to 11.  In order to blink the onboard LED on the Teensy 3.0, you must change the pin number back to the standard Arduino pin 13.  Like previous Teensy boards, the IDE launches Teensy loader to do the actual transfer to the board, rather than using avrdude.

Normally, it is not necessary to press the button on the board in order to initiate firmware upload, but it is there as a backup. Firmware upload is very fast, since the Teensy 3.0 has a native USB interface, rather than going through an FTDI Serial->USB converter.

I am looking forward to building projects with the Teensy 3.0, once I figure out a use for its extra horsepower.

I just backed the Teensy 3.0 on Kickstarter.  It’s designed by Paul Stoffregen, the same wizard behind the Arduino-compatible Teensy boards.  It sports a 32-bit ARM Cortex-M4 chip, and is programmable via Arduino and C.  This looks like it’s going to be a great platform for building embedded projects that need more power than the typical Arduino.  The board is tiny compared to Raspberry Pi.