This morning, I repeated my Eaton Canyon loop with the Pyle PSWGP405BK and RunKeeper on the iPhone 4S.  This time, both of them were quite a bit more accurate than on the last hike. 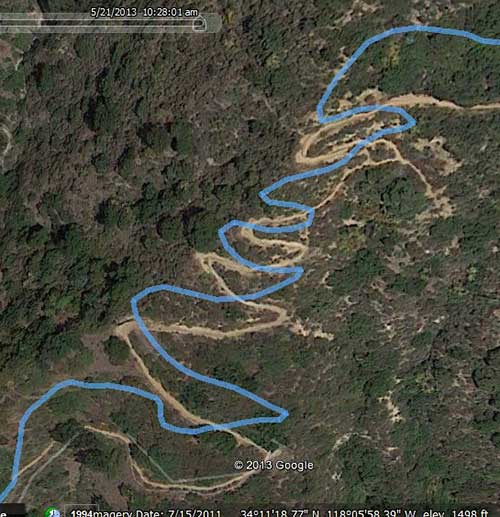 This time round, the Pyle tracks the shapes of the switchbacks fairly accurately, albeit with an offset.  There is a fair amount of overshoot, however, in the last switchback. 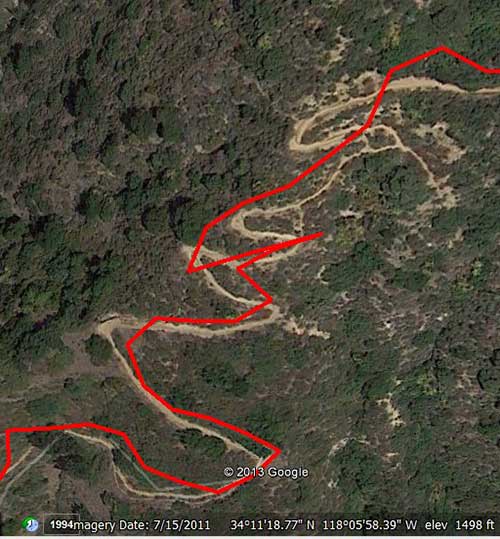 RunKeeper on the iPhone 4S again does much worse than the Pyle, but still much better than in my previous recording.  Out of the various iPhone tracking apps I’ve tried, I still find RunKeeper to be the most accurate.  I would like to try this route with an Android phone sometime, to see if it does a better job with outputting accurate location data. Here’s the tabular data:

Interestingly, the disparity between RunKeeper’s distance calculation of its own track vs its calculation of the Pyle’s track was much smaller today, but this can be explained by the fact that RunKeeper didn’t meander as badly today, so the tracks lined up more closely.

On the other hand, disparity between the results I got today and my previous post show how GPS accuracy can vary, even in similar weather conditions, at a similar timeof day on the same route.  I would conjecture that the increased accuracy today has to do with a more optimal geometry of the satellites in the sky. Unfortunately, since the devices I used don’t output detailed satellite signal and skyview data, there is no way to verify for sure.

This evening, I again pitted RunKeeper against the Pyle, walking on a very flat route, composed mostly of straight lines. Here are the surprising results: 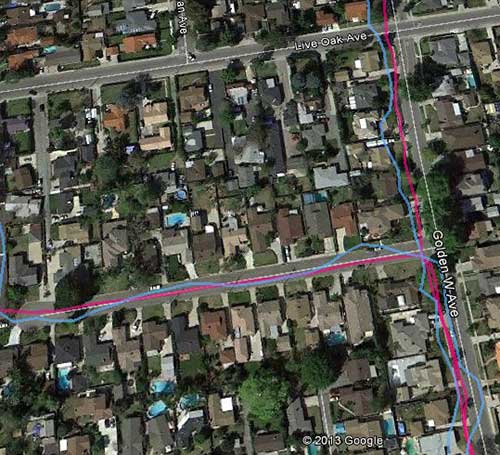 Like this morning, the RunKeeper and Pyle tracks were a lot more similar than on previous days. RunKeeper’s distance was .11mi longer than its calculation of Pyle’s track, which makes sense, because its track was more wiggly, as usual, which adds distance.  But what’s inexplicable is that on this track, the difference between the Pyle’s own distance calculation versus RunKeeper’s calculation of its track is only .05mi, only 1.5%.  Contrast that to this morning’s hike, where the difference was .12mi or 3.6%.

5 thoughts on “Accuracy of Pyle PSWGP405BK vs RunKeeper Revisited”