I have always had trouble printing small parts and overhangs, because I was too lazy to add cooling to my hot end tip. I sometimes used to just blow a USB fan at the printer, but this has two bad effects: 1) the cooling isn’t localized enough, so it doesn’t work very well, and 2) the unfocused air flow cools down the heat bed, which can cause the print to detach. I looked at a bunch of fan shrouds that other people have been using, and didn’t like the way that most of them still leak a lot of air onto the hot bed. The thought occurred to me that the air coming out of the hose of an aquarium air pump is quite focused, so I decided to hack something together to test it out.

This is a fish pump that I happened to have laying around: 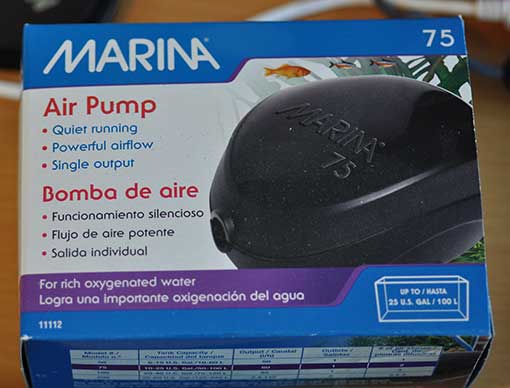 I used silicone airline tubing, because it’s more flexible than the regular clear tubing, and doesn’t harden with age, and is heat resistant. Here is my messy hack to test out the concept: 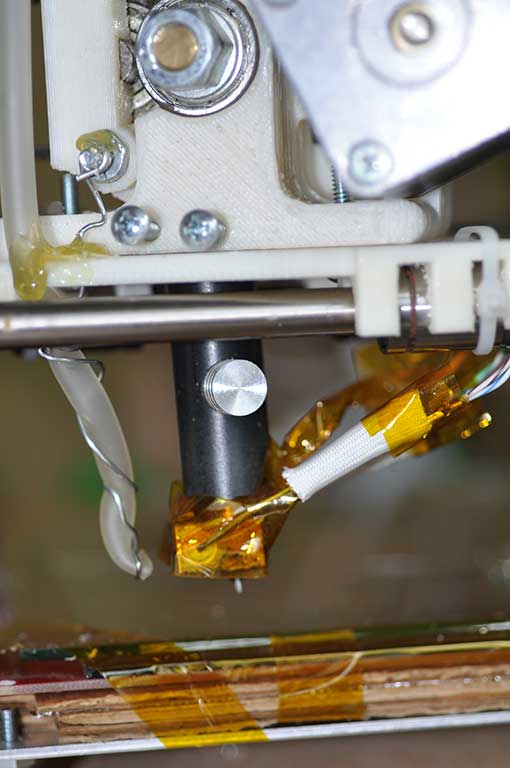 The silicone tubing is held in place with a couple of bent up paper clips. I love my J-Head Mk III-B – it works flawlessly, even without fan cooling the aluminum heat sink, but one annoying thing is that the nozzle is very short, so there’s very little clearance between the nozzle tip and the heat block. This made placement of the cooling hose sub-optimal. It’s very hard to position the hose to cool the flow of plastic without hitting the print. Nevertheless, much to my delight, it works pretty well! Below is a comparison of printing with and without nozzle cooling. The part is a holder for a steel ball from Steve Graber’s Cerberus Pup. The print on the left was done without nozzle cooling, and the print on the right with cooling: 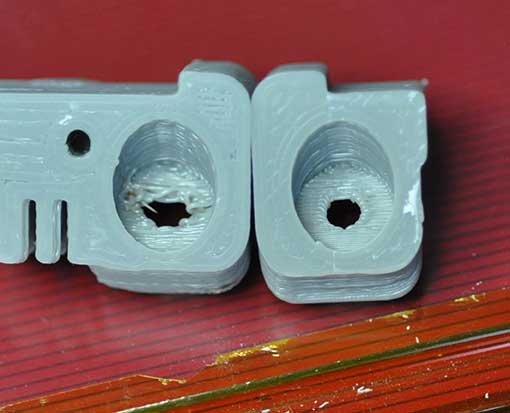 The view above is from the bottom of the part, so the flat part inside the hole was an overhang. Note what a mess it made of the uncooled part. Below is a top view of the part: 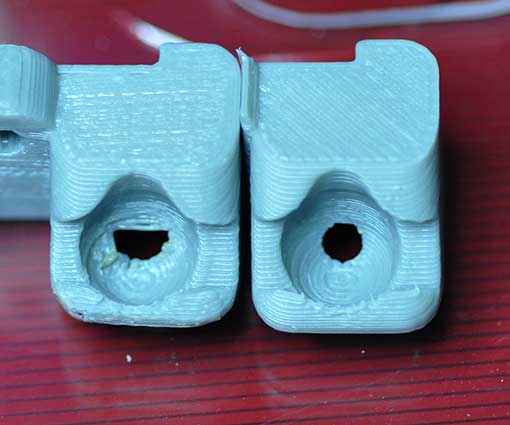 The cooled part was a perfect, tight fit for a 3/8″ steel ball bearing. I was amazed how accurately the part came out. 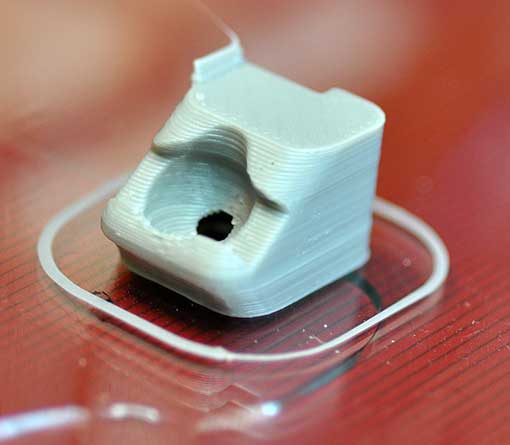 Being the lazy person I am, I’m going to keep the jerry-rigged setup until it falls apart. So far, it’s been holding up quite well, allowing me to print out all of the parts for the Kossel-Linco delta printer that I’m designing. There are 3 main downsides to using the fish pump rather than a fan: 1) the pump is rather noisy 2) It uses AC power, so a relay is needed in order to control it via software, and 3) it’s difficult to control the air flow by software. What I’ve been doing is to start the print with the pump off, and then turn it on after the first few layers are done printing.