In my article, How to Repair a Panasonic Massage Chair, I described how I fixed my Panasonic EP1004 massage chair. The chair worked for a year or so, and then stopped working again. The symptoms this time were a bit different from when the clutches got stuck. Instead of running for a while, and then beeping and shutting itself off, the massage mechanism stopped moving up and down. The chair was just stuck in kneading mode, and wouldn’t do anything else. +I was pretty sure the problem was due to a loose belt, but just didn’t feel like taking it apart again. Tonight, I decided it was time to get it working again. I opened it up, and sure enough, one of the belts had slackened so much that the pulleys were just freewheeling. The loose belt was the small one on the far left in the photo below:

The belt doesn’t look loose in the photo, because I forgot to take a photo of it before tightening it up. Unfortunately, there was no adjustment left to tighten the belt. It must have stretched over it’s 15+ year lifetime. I’m pretty impressed by the quality of the of the belts in this thing. They haven’t dried up at all. If you look in the photo below, there are two screws in horizontal slots between the two pulleys. Note that the screws are all the way on the left of the slots, which means that the motor has already been slid as far as it will go to the right. Yet, the belt was still quite loose. I finally jerry rigged a fix by jamming a piece of rubber hose in between the motor and the metal box it’s attached to. To stiffen up the hose, I stuffed a wood dowel into it. The rubber hose is in the photo below, under the green/yellow wire that grounds the motor to the chassis. 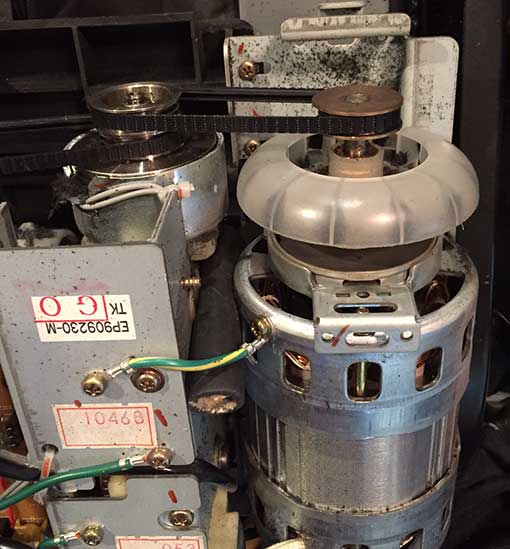 The chair is now working again… until something else goes wrong.

13 thoughts on “How to Repair a Panasonic Massage Chair, Part 2”