I’ve been designing a bot that attempts to get the best possible performance out of a Printrbot-style open frame design.  The design has a long way to go in terms of refinements, but I’ve started testing out the basic concept.  To address the Printrbot’s main shortcoming, the y-axis sits on a very wide base, and the leadscrews are only 5mm in diameter, and coupled to the z-motors with rubber tubing,  which pretty much cancels any effect of wobbling on the much thicker 8mm z-axis smooth rods.  So far, I’m able to print at roughly double the speeds of my Printrbot for the same quality prints.  I wanted to try low layer heights, and decided to use the  infamous Pink Panther Woman to do some tests (BTW, if anyone knows why it’s named Pink Panther Woman, please leave a comment below).  Here is my prototype printer after finishing a print: 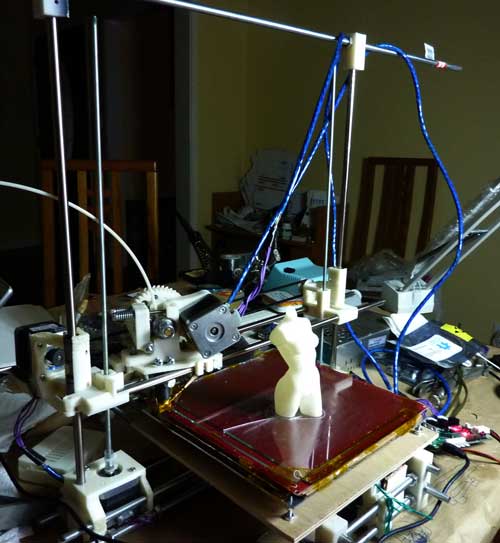 I printed Pink Panther Woman scaled down to 75% with .2mm layers, no infill, and 2 perimeters.  Printing hollow, thin-walled objects can be challenging, because the layers often start to curl up when printing expanding layers.  A cooling fan is helpful.  I ran the printer with the latest Repetier-Host software, which has a slider for dynamically adjusting the speed during a print.  This let me speed up the printing of the less challenging layers by 150%.  It took about 1.5hrs to print.  Here’s the result: 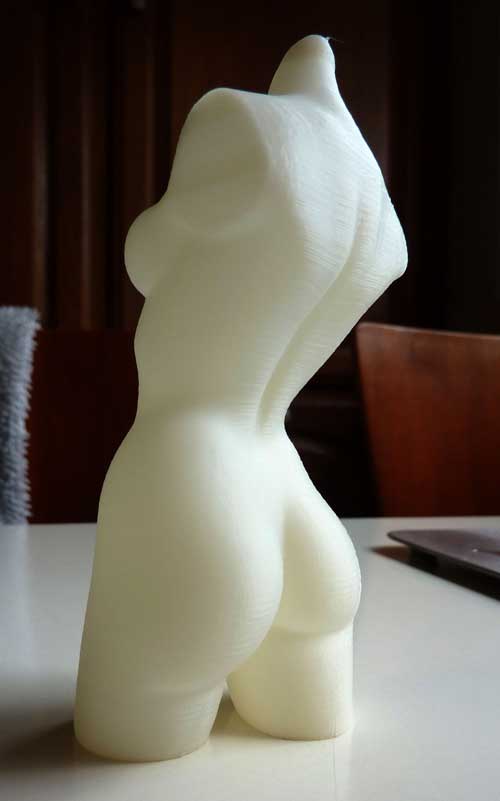 My best quality print to at the time.  Click the image above for a full resolution photo. It was not without some issues.

Some of the flatter sections of the print had some gaps: 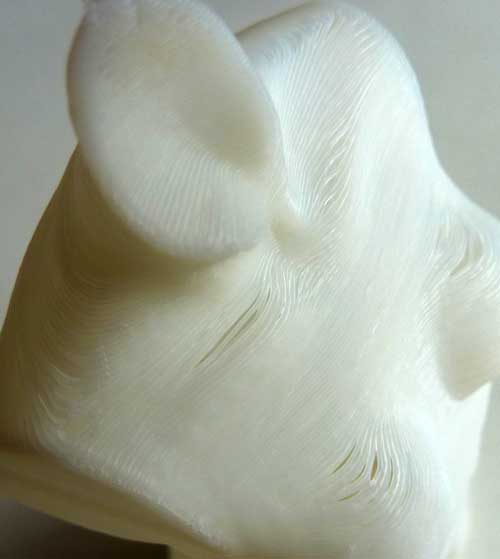 In retrospect, I should have paid attention to Repetier Host’s excellent G-code inspection feature, and noticed the problem before I started the print: 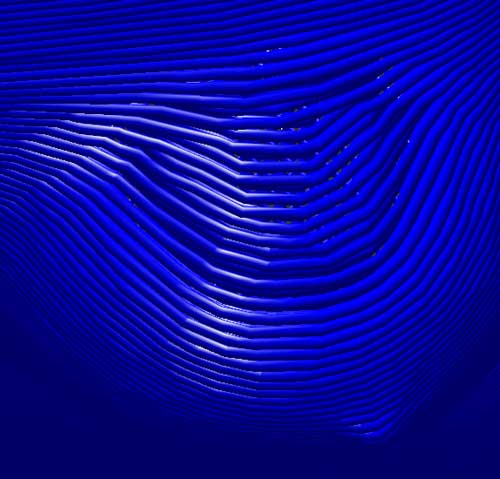 Clearly, the G-code output by slic3r had gaps in it.  Repetier Host’s G-code preview is a great way to inspect your G-code for problems before wasting plastic and time.  It lets you pan and zoom through your G-code, and even inspect single or ranges of layers.

Also, a couple of layers didn’t stick well to each other.  Notice the horizontal line in the middle of the torso, caused by the layers separating from each other: 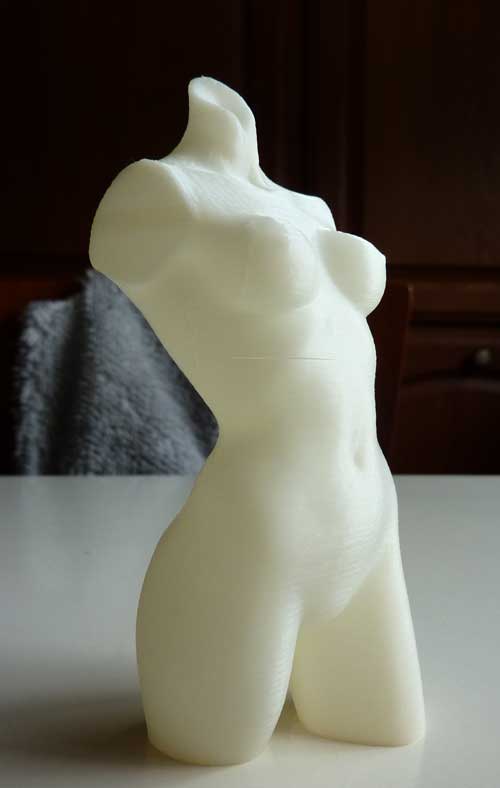 To address this issue, I increased the extruder steps/mm from 560 to 585, so that it would extrude a bit more plastic.  The extra plastic would also help to close the gaps a bit in the flat section.  Also, I increased the number of perimeters from 2 to 3, so that there would be more support from previous layers.  At the same time, I also cut the layer height down to .1mm.  This was the first time that I ever tried to print with .1mm layers.  Printing such small layer heights brings its own set of challenges.  The print bed leveling and z height must be very precise to get the initial layer down nicely.  The threads coming out of the extruder are so tiny that curling of the hot ABS becomes even more of an issue.  After a few false starts, I decided to let the print go at slower speed, and fine tuned my cooling fan’s position.

The .1mm layer height print took about 4 hours.  I was totally blown away.  It’s my best print to date.  The layers are practically invisible, and it’s so detailed that I can actually see some of the polygons that comprise its shape.

Again, click the image above to see the full resolution photo. I need to get a better macro lens – sorry that it’s a bit fuzzy. The tweaks I made solved the gaps in the flat parts of the print, and all of the layers are firmly stuck together. However, the print was not without some issues.

I knew the print was going to take a long time, so I didn’t want to use my main PC to run it, because sometimes, when I’m running lots of apps during a print, the hard drive will thrash, and cause short pauses in the printing; this causes blobbing in the print.  So I decided to run Repetier Host on my Mac instead.  I figured that starting the print from a cold boot, and no other apps running would give me a trouble-free print.  What a big mistake.  Note to self:  Don’t use my Mac for printing!  The printing froze several times during the print.  One of the pauses occured about 3 hours into the print, and lasted almost a minute!  I was freaking out, and then luckily, the printer started moving again.  As a testament of the JHead’s great design, even this long pause only caused a small blob.  The large blob that looks like an extra nipple was caused by the ~1min pause: 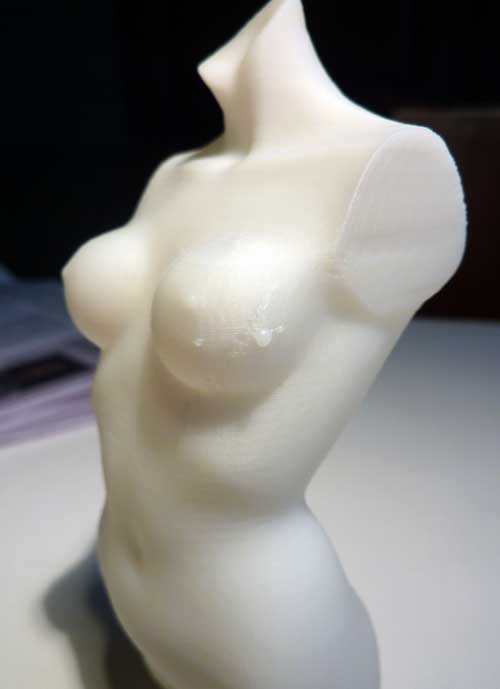 The other smaller blobs were caused by shorter pauses. I’m amazed how smoothly and consistently the JHead extrudes plastic.  The only complaint I have about the JHead is that it shouldn’t have the protruding nipple on its nozzle tip.  The sharp edges of the nipple causes blobbing when doing layers with 100% infill.  These blobs are not only ugly, but sometimes, they cause the hot end to knock the print loose from the bed.  The problem is that the sharp edges of the nipple can dig in and gouge the plastic thats already been deposited, remelting it, and moving it around.  Then, the sharp edges hit against the raised blobs, knocking the print loose.  Here is a particularly severe example of this issue: 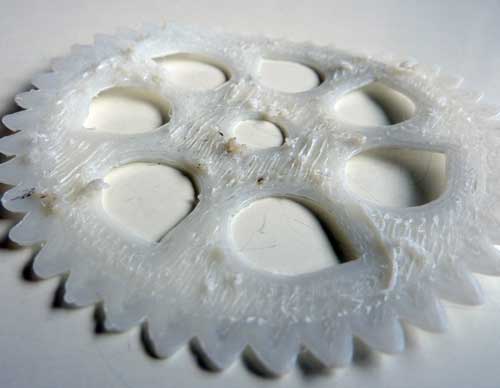 Fortunately, a simple mod to the JHead cures the problem.  Simply file off the sharp edges from the nozzle tip: 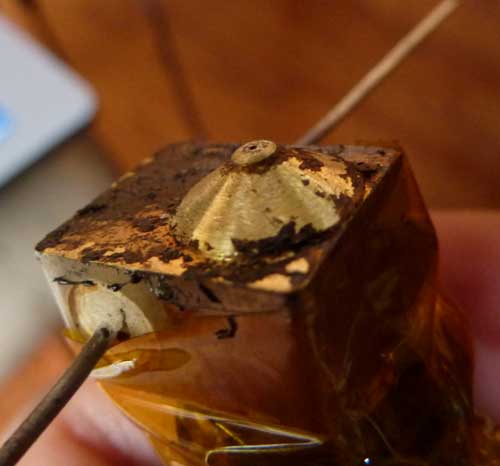 I’ve had no more issues since I did this quick mod.

Below are some comparisons of the .2mm (left) and .1mm (right) layer height prints: 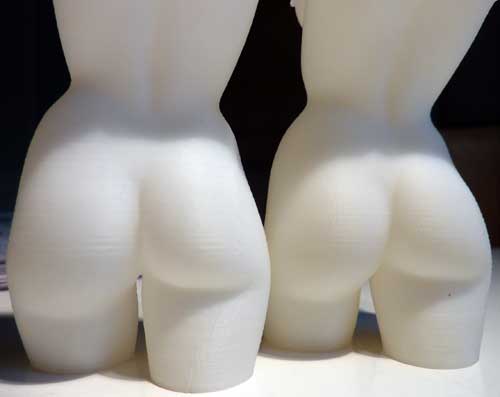 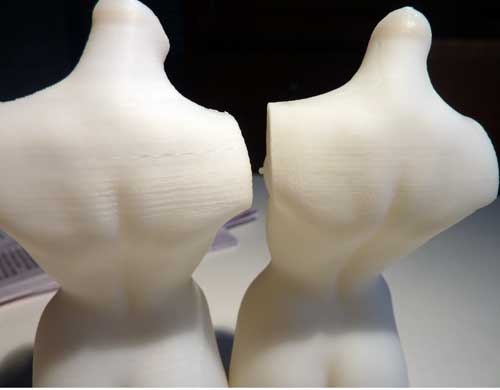 After all of the trials and tribulations I had learning about Repraps, it’s quite rewarding to finally be getting some beautiful prints.