It’s been a few years since I hacked together the copy of Arduino-0022 that’s been floating around the web, which lets you compile and automatically upload Arduino code to an AT90USB1286. This made it a lot easier to develop Arduino code for the AT90USB1286, and in particular to easily modify the Marlin firmware for the Printrboard.

Yesterday, I figured it was high time to add AT90USB1286 support to Arduino 1.0.5-r2. The basic procedure for the modification was to first install Teensyduino, which adds the AT90USB1286 compilation support to Arduino, but only uploads to a Teensy++ 2.0, running PJRC’s proprietary halfkay bootloader. I modified the Teensyduino configuration to also support uploads to targets running the LUFA CDC Bootloader, or via USBtinyISP or USBasp ICSP programmers.

Once you unzip the archive and launch arduino.exe, you will notice some new entries in the Tools->Board menu:

The only difference between the Printrboard and AT90USB1286 entries is that the extraneous USB Type, CPU Speed, and Keyboard Layout submenus are grayed out from the Tools menu.

To load Marlin firmware onto a Printrboard, you will most likely want to use [BootloaderCDC]Printrboard.

Note that unlike my Arduino-0022 hack, the pinMode()/digitalRead()/digitalWrite() functions in version currently only support the pins that are exposed on the Teensy++ 2.0. This is because I haven’t yet had the time to figure out how to add in the remaining AT90USB1286. However, this limitation doesn’t affect Marlin firmware on the Printrboard, because Marlin uses its own fastio functions, rather than using Arduino digital pin numbers and pinMode()/digitalRead()/digitalWrite(). See pinmap.txt for the currently supported Arduino digital pin numbers.

Thanks again to PJRC for Teensyduino. Teensys are a great alternative to Arduino boards.

I am currently aware of 3 bootloader options for the AT90USB128x MCU’s:

This is the bootloader officially supported by Atmel.

PRO: can integrate into Arduino IDE; works with avrude via avr109 protocol.

Before you can install a bootloader on your MCU, you must set the fuses correctly to allocate space for it.  We need 4K bytes (2K words) of space, so using the Engbedded Atmel Fuse Calculator, we see that we need Boot Flash Size BOOTSZ=01,  which is in the high fuse.  Here are the fuse settings that I use on mine:

BE CAREFUL IF YOU WANT TO FIDDLE WITH FUSE SETTINGS YOURSELF.  It’s not hard to “brick” your AVR with the wrong settings.  In fact, when I was first working with my Printrboard, I managed to brick it by messing up the CKSEL bits, thinking I was supposed to set it for an external oscillator.  Luckily, all I had to do was connect an external oscillator (I used the signal generator function of my DSO Quad mini scope) to XTAL1 and then use avrdude to fix the offending fuse.  If you do something worse, like disabling SPIEN by accident, you might have to resort to HV programming.  Here is some info on recovering a bricked AVR:  http://www.larsen-b.com/Article/260.html

Note that I have set hfuse = 0xdb, which disables the JTAG interface.  This makes more I/O pins available (in particular, some of the pins exposed on the I/O headers of Printrboard).  If you want to use a JTAG programmer, you should instead set hfuse = 0x9b.

Once your fuses are set correctly, use avrdude with your programmer to upload the bootloader.  After your bootloader is installed, you don’t need to use the programmer anymore – just a USB connection is enough.

Once a bootloader is installed (see instructions below), the bootloader must be activated when you want to upload firmware.  To boot the AVR into the bootloader instead of normal program code, you must tie the HWB pin to ground during a RESET pulse.  To to this on Teensylu or Printrboard, simply remove the 2-pin jumper that’s next to the AT90USB1286 chip, then press and release the reset button.  You can then replace the HWB jumper.

NOTE: If you have a Printrboard RevD, the jumper has been reversed, and needs to be INSTALLED to get into the bootloader, and REMOVED to run your firmware.

Below, I describe how to install and use each of the bootloaders.  For Arduino IDE integration, use BootloaderCDC.  I also like BootloaderHID, because it doesn’t need drivers, and doesn’t require selecting a virtual serial port.

NOTE: When uploading a bootloader to the AT90USB1286 using a USBtinyISP, you will get a verify error from avrdude.  You can safely ignore it.  The problem is that the USBtinyISP has a bug with reading flash memory above the 64K (10000h) boundary.  However, it can write it without problems.

If you want to use your RepRap for CNC use, such as milling PCB’s, regular 3D printing firmwares might not be ideal. For instance, Marlin is not able to handle the slow step rates used for CNC work.

I have ported grbl, a firmware specifically for CNC use (from which Marlin derived its acceleration routines), to Printrboard and Teensylu. You can download it from my fork at: https://github.com/lincomatic/grbl.

My first step in loading Marlin RepRap firmware into the Printrboard is to get Arduino to play nicely with it.  The method I am going to describe in this article for programming a Printrboard with Arduino will work with the Teensylu or any other device that uses the AT90USB1286 and has an ICSP connector.   The programmer we are going to use is a USBtinyISP or compatible. Since the AT90USB1286 isn’t officially supported by Arduino, it takes a bit of setting up to get things working properly.

I first looked at the instructions on Teensylu’s page in the RepRap wiki, but found them very confusing, and I didn’t like the idea of having to send the HEX file to the MCU using an external utility instead of doing everything within the Arduino IDE. So, I set out to streamline the process and document it as I went.  If you follow my method below, you’ll be able to compile and download your firmware all within the Arduino IDE.

Teensyduino was created by PJRC for their Teensy line of boards.  Teensy is a great alternative to Arduino if you want an ultra compact board with built in USB.  The Teensy++ happens to also use the AT90USB1286, so it’s compatible w/ Printrboard/Teensylu.  Follow PJRC’s instructions for installation from the download link.

If you only plan to program for RepRap, you don’t need to install any of the libraries.  On Windows, you will be prompted to install the serial driver. Select yes.  You don’t have to worry when Windows complains that the driver is unsigned… it’s just an INF file to tell Windows to use one of its own built-in drivers.

Navigate to where your Arduino files are located.  On my computer, I have them in d:\arduino-0022.  We will call this <arduinofolder>.  Now, find the subfolder where the Teensyduino library was installed:

If you are in the correct folder, you should already see a boards.txt and a subfolder called core in there.  Drop the files from at90usb1286txt.zip into that folder, overwriting the existing boards.txt.  You should see something like this:

If you don’t plan to develop with any of PJRC’s Teensy or Teensy++ boards, you can keep them from showing up in your Arduino menu by copying boards.txt.nopjrc over boards.txt.

Now, when you start Arduino, you should see some new configurations in the Tools->Board menu.  The important ones are:

At this point, you can plug in your USBtinyISP and into your AT90USB1286/Teensylu/Printrboard and start programming!

So what are the [BootloaderCDC] configurations for?  They allow you to download sketches into your target board directly through a USB connection to your host, without the USBtinyISP programmer.  See my next article for details on how to do that.

Update 20140909: I have uploaded a copy of Arduino 1.0.5-r2 for Windows to github, which is already modified to work with the AT90usb1286, so you don’t have to modify it as above. Simply go to https://github.com/lincomatic/arduino-1.0.5-r2-at90usb1286 and click the Download Zip button, and then extract the contents to your PC. My distribution also supports the USBasp in addition to the USBtinyISP.

I have been somewhat intrigued by the RepRap project, an open source 3D printer movement, for several years.  However, wasn’t motivated enough to jump into the fray until late last year, when I saw Brook Drumm’s Printrbot on Kickstarter. 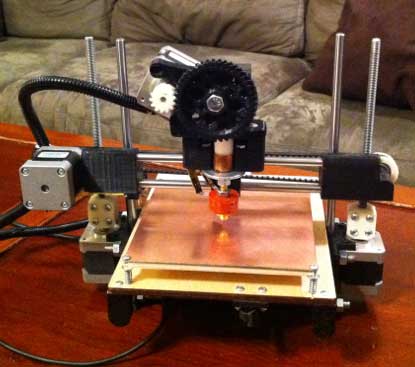 With only about 1 hour left before funding closed, I pledged $500 to get a Printrbot kit. While I could have started from scratch, and built a Prusa Mendel, after reading about how much tweaking is involved in building and setting up a RepRap, I decided to start with a Printrbot – a cute, compact, and simple design, and the most inexpensive RepRap at the time.  Printrbot’s Kickstarter was a smashing success.  They raised an astonishing $830K. Unfortunately, the gigantic amount of orders they received means that mine will take a little longer to get to me than I originally anticipated. So, I’ve been immersing myself in the intricacies of the electronics, firmware, host software, and mechanical aspects of RepRap for the past couple of months.

There are a variety of popular controller electronics for RepRap, the most popular being RAMPS.  The electronics are one of the largest costs of building a RepRap.  Although RAMPS is convenient, because it’s based on an Arduino Mega, I like the idea of having a single dedicated board.  The Printrbot folks have designed their own controller board, which they call Printrboard.  Although Printrbot is not yet selling Printrboards, the design is open source, and thus, I was able to obtain one before their release.

Kang, a fellow RepRapper from Seoul, Korea, built a few Printrboards and sent me one to play with. 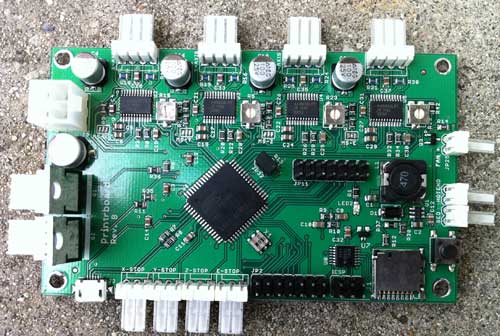 Printrboard is a fork of Teensylu, an AT90USB1286/AT90USB1287 based RepRap controller.  I like the fact that these boards are based on the AT90USB128x MCU’s because they have built-in full USB support, eliminating the need for an external serial->USB bridge IC; additionally, the native USB support means that communication with the host computer is blazingly fast – 12Mbps rather than 115200kbps.

There are a few notable differences between Printrboard and Teensylu.  Printrboard is a single board solution.  First, Printrboard adds an integrated SD card reader.  This is handy for printing while untethered to a computer.  Teensylu has I/O pins which can be used to easily add an SD card reader.

Second, the stepper motor drivers are integrated onto Printrboard’s PCB, while Teensylu uses plug-in Pololu/Stepstick carriers.  The advantages of integrating the stepper drivers onto the main PCB are reduced cost and compactness.  The downside is that it is not uncommon to blow up a stepper driver IC, so having them soldered in means if one goes bad, the whole board is unusable.

Third, Printrboard uses Allegro A4982’s in a 24-TSSOP package, while Pololu/Stepstick use the Allegro A4988 in a 28QFN package.  The TSSOP package is considerably larger, and has a wider pin pitch, which makes reworking the board easier if one of them blows out; the 28QFN is very tiny and not for the faint of heart.  The other difference between the A4982 and A4988 is that the A4982 only supports full/half/quarter/sixteenth stepping, while the A4988 also supports one eighth stepping.

I am diving into figuring out how to load Marlin RepRap firmware into Printrboard/Teensylu, to keep my end of the bargain with Kang.  A series of articles will follow with my findings.