Ever since I bought my Roland TD-3SW v-drum kit, I’ve found the included FD-8 hi-hat pedal to be a major annoyance. The problem is that I would practically have to stand on the pedal in order to get the hi-hat closed sound. Adjusting it according to the instructions in the manual didn’t help. I basically lived with it this way until my son recently wanted to start using my drum kit, and couldn’t apply enough force to the FD-8. It was time to fix the problem.

I googled around and found a few fixes, notably this discussion on vdrums.com: FD-8 Hi-hat Controller Pedal – Notes on Improving Volume and Feel. However, I felt that the fix described in the thread seemed too hacky for my tastes. Finally, I found this video on YouTube by a brilliant German guy: How to fix a Roland FD-8 hihat pedal. I decided to try his method, and it worked great! My pedal now has action a lot more like a real hi-hat pedal; you don’t have to mash it down hard to get the “closed” sound. I’ve modified the procedure a little, and have documented it below:

In the YouTube video, Marcel practically tears down the entire FD-8. Actually, you don’t really have to disassemble everything. All you need to do is get access to the problem parts. Remove only the screws pictured in the photo below from the bottom of the pedal: 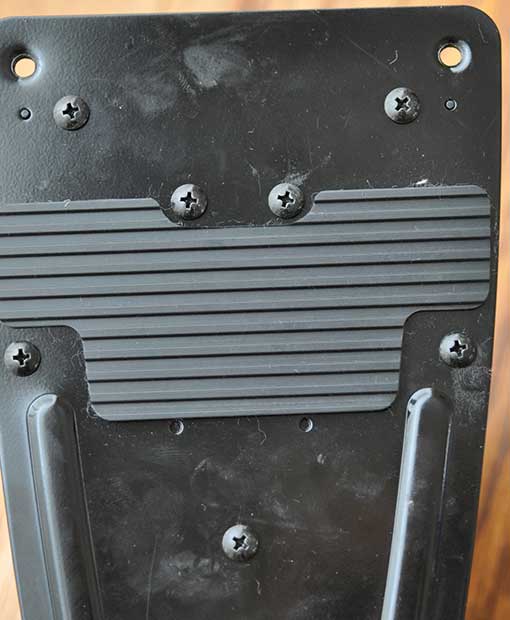 This will allow you to separate the front plastic cover from the metal bottom. The bottom metal plate has a resistor attached to a small PCB via a ribbon cable, which is attached to the 1/4″ TRS jack. This is what the resistor looks like: 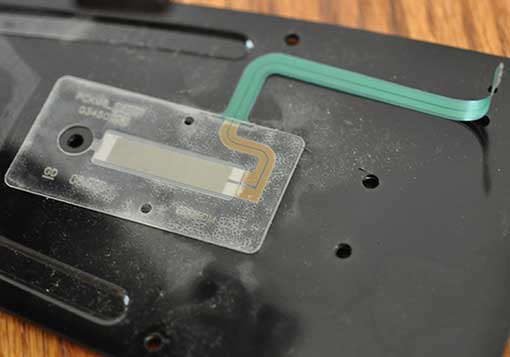 There is a rubber foot (show in a photo below), which presses along the resistor in order to tell your drum’s brain box the position of the pedal. The problem is that the rubber foot doesn’t press hard enough against the section that indicates hi-hat closed (low resistance), near where the ribbon cable connects.

When you open the case, the ribbon cable will be attached to the grey clip pictured below: 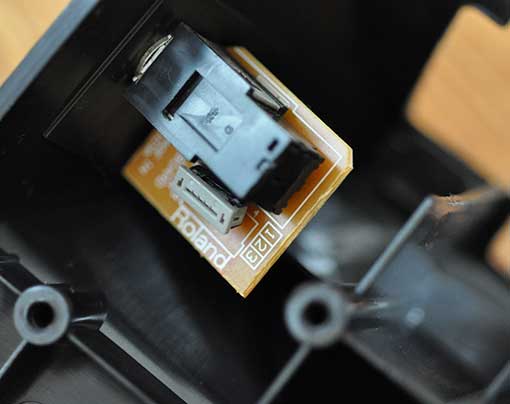 To release the ribbon cable, simply pull upwards on the grey part of the clip until it stops. Then the ribbon will easily slide out of the slot. The rubber foot is attached to the underside of the plastic cover: 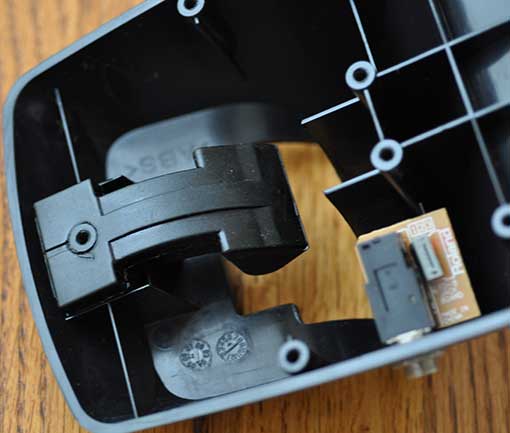 The problem is that the rubber foot is extremely stiff, and doesn’t bend as easily as it should. To remove it, gently rock it back and forth while pulling upwards. In the video, Marcel sprays silicone lube on it to loosen it up, but mine wasn’t that tight.

The method shown in the video is to soften up the rubber foot by thoroughly coating it with petroleum jelly and letting it sit in a warm place overnight. Since petroleum jelly eats rubber, I decided to apply it only on the part that affects the flex action, and not on the contact surface:

In particular, notice how I avoided applying petroleum jelly to the narrow protruding ridge. This keeps it from softening the ridge, which we want to remain hard, to maximize the pressure and lessen wear. 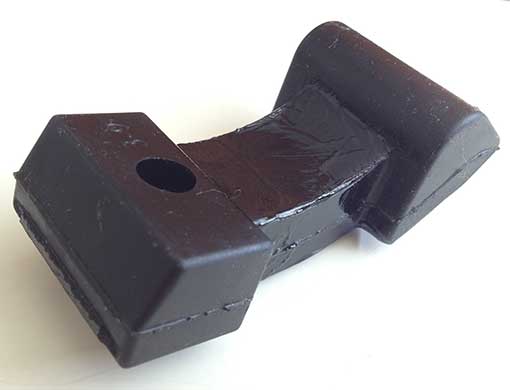 I left the rubber foot on top of my cable TV set top box (a consistent heat source) overnight. The next morning, the rubber was considerably softer, and I could tell that it was taking a lot less force to flex it. Again, here’s where I deviate from Marcel’s video. He initially applies the petroleum jelly a lot thicker than I did, and says to wipe it off after the rubber softens, leaving a layer that’s approximately as thick as what I applied in my photos above. Instead, I wiped the petroleum jelly residue completely off with a paper towel. I figured that some of it would still be soaked into the rubber, and that would be enough. Better than having it eat through the rubber until it turns to mush. 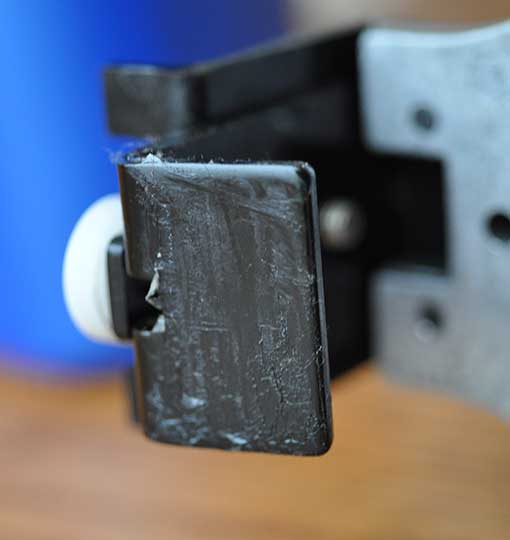 Mine still had enough lube on it from the factory, so I didn’t apply any extra. The rubber foot slides against this metal tongue when you press the pedal, so if it isn’t lubed properly, the pedal may need extra pressure. DO NOT use petroleum jelly here, because it will slowly melt the foot, and probably turn it into mush over time. Silicone lube, on the other hand, does not react with rubber. You can get small quantities of silicone grease in most auto parts stores.. it’s used on the rubber bits of brake parts. Also, you can buy it pool supply stores, or at a hardware store. This cheap stuff at Home Depot should work OK: Silicone Faucet Grease.

My pedals has great action now! I’m not sure if it will harden up in a few months, but the hack is easy and I’d rather play the hack on the conservative side. An alternative hack would be to drill holes along the side of the rubber foot, thus lessening its tension. I was originally going to do this, and it turns out someone on vdrums.com successfully did it (see the the 2nd to last post on this page), but in the end, I decided to first try the petroleum jelly method, since it was less invasive. Thanks again to Marcel (vdrumtips).