I’ve always thought VFDs were pretty cool. They used to be the rage in high end consumer electronics. Back in the mid 70’s, I built a VFD alarm clock. Recently, I got my hands on a modern VFD module to play with. The Noritake-itron SCK-Y100-24063-N14 is a very flexible 24×6 character VFD module in the same form factor of a 20×4 character LCD module. It is a member of Noritake’s CU-Y series VFDs. 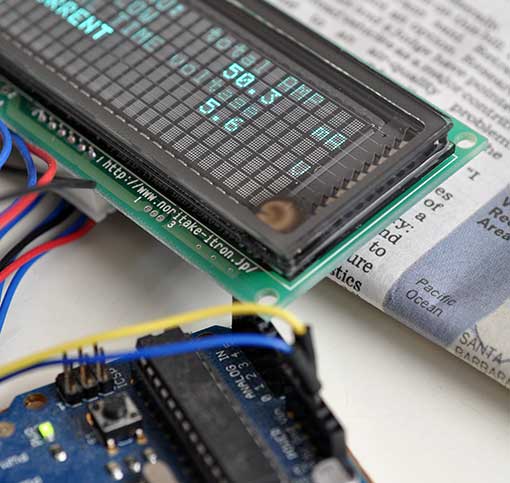 The video below compares the Noritake 26×6 VFD to a 20×4 LCD. The characters are noticeably smaller on the VFD due to the higher density, but still quite readable.

This page shows some of the versatility of the Noritake VFD: Versatile Character Display CU-Y Series

The VFD comes pre-configured to operate in async serial mode at 38400 baud. It isn’t necessary to use a UART to talk to the VFD; any GPIO pins will suffice. A minimum of 2 pins are needed, for SIN (input) and SBUSY (output). A third GPIO pin can be connected to RESET (input). I hooked mine up to an Arduino UNO as follows:

Here’s what it looks like from the front, running Noritake’s Arduino menu demo: 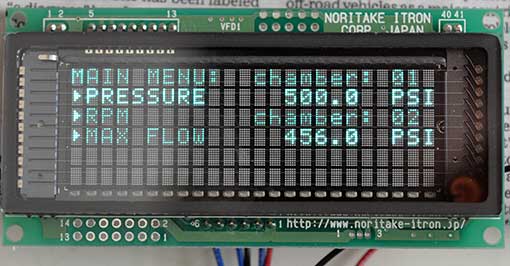 The lower contrast on the left side of the photo is due to my camera’s reflection – the glass is very reflective. Note the highlighting via localized variations in brightness. Here’s what it looks like with a blue filter on top (again, apologies for the reflections – it actually looks a lot better than this photo):

Though my photos are crap, the display is quite easy to read indoors. I wouldn’t recommend it for outdoor use, however, or anywhere that you expect direct sunlight.

The writing speed of this VFD is very fast. Running in async serial mode on an Arduino UNO at 38400 baud, I was able to output 120 characters in a mere 38ms, which is about 3x faster than LiquidTWI2 can muster, even after the I2C bus is tweaked (and over 100x faster than LiquidTWI2 w/o I2C bus frequency tweaking). Unfortunately, Noritake’s Arduino library doesn’t compile on a Teensy 3.x, because it contains AVR assembly code in a timing function, and calls _delay_us(), which isn’t implemented on the Teensy 3.x. On the other hand, it should not be hard to replace these two functions. To use the Noritake VFD with Arduino, first download the Arduino code library. From the Arduino IDE’s pull-down menu, use Sketch->Import Library…->Add Library... to import Arduino_Noritake_VFD_CUY.zip. Include the following headers into your sketch:

Two classes need to be instantiated:

Note that Noritake chose to implement only partial compatibility with the LiquidCrystal library.  So while vfd.print(s) is supported, vfd.setCursor(x,y) is not; one has to instead call vfd.CUY_setCursor(x,y). The Noritake_VFD_CUY class methods are declared in Noritake_VFD_CUY.h. Noritake includes a few sample sketches, which you can access from Arduino’s menu via File->Examples->CUY.

Noritake also provides a handy host program, which lets you configure and test the display without a microcontroller. 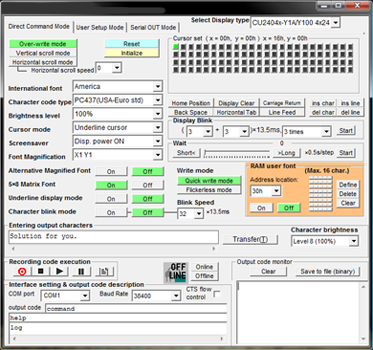 To use the program, connect the VFD to a PC running Microsoft Windows via a Serial->USB adapter, such as an FTDI cable. Using the Serial->USB adapter opens up the possibility of using the VFD  as a USB auxilliary display for a PC.

SCK-Y100-24063-N14 Overview
CU-Y: Y-Series Evaluation Software
Code Library
Arduino Library with examples
Sample C++ code and configuration/hookup
How to use custom fonts
How to use the built-in font tables
How to use the font magnification command
How to create a menu using the highlight effect