I’m currently designing my first delta 3D printer. It’s based on Johann Rochell’s Kossel Mini, but I’ve modified or redesigned just about every part, except for the bottom vertices. The first design decision I made was to get rid of the expensive linear rails and sloppy Traxx joints. I like the magnetic ball joint concept, because 1) it gets rid of backlash 2) it makes it easier to assemble/reconfigure/repair the printer and 3) it’s just plain cool.

I used OpenSCAD to design the magnetic effector: 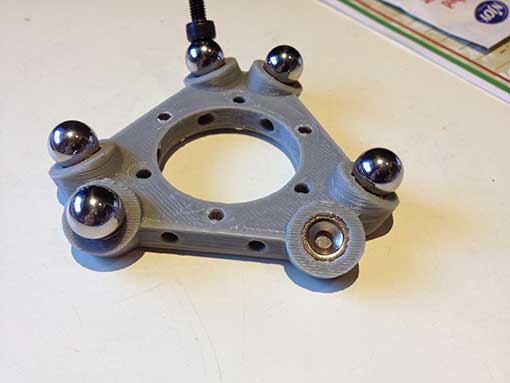 The 3/8″ chrome steel balls are each held to the effector by a 3/8×1/8″ N42 countersunk magnet stacked on top of a 3/8×1/8″ N52 disc magnet. It’s hard to see in the photo, but 3 of the six holes around the inner ring contain 1/8×1/4″ tubular magnets, allowing the toolhead to also be magnetically attached. This will allow me to quickly change toolheads on the effector without having to fiddle with bolts. I am still not sure if the toolhead magnets will be strong enough… only testing will tell. Though quick change could be done by simply swapping out effectors, I don’t like that idea for two reasons: 1) it’s more expensive and 2) different effectors will not be exactly the same, since they are printed, and can also warp, necessitating tweaking every time the effector is swapped.

The first toolhead I designed is a J-Head groove mount for a bowden extruder: 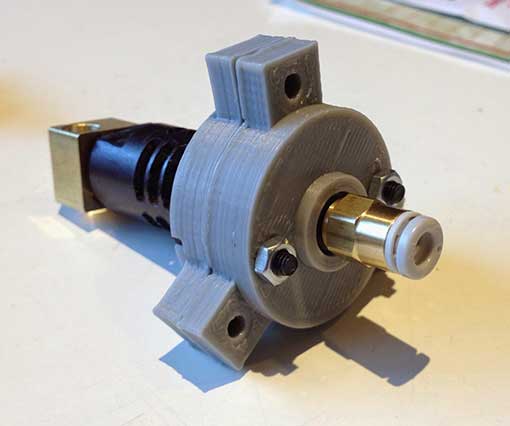 Below is the assembled effector and hot end: 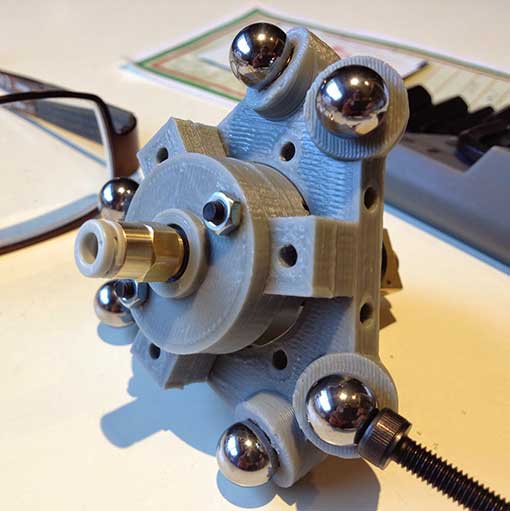 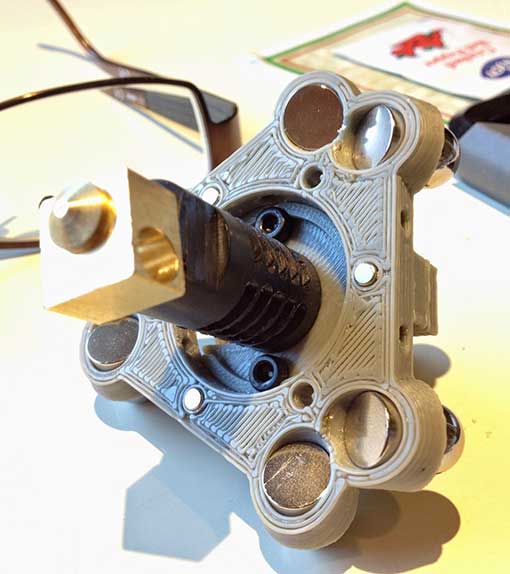 The most difficult problem was how to attach the chrome steel balls to my carbon fiber arms. Rather than glue the balls directly to the arms, I decided to attach the balls to screws, and then screw them into the arms. This technique has 3 advantages: 1) it gets rid of the need for accurate, square cuts on the rods, because the length can be fine-tuned by adjusting the screws , 2) the balls are easily replaced, and 3) the screw heads are magnetic, so they self-center and hold themselves to the balls while they’re being attached.

I used chrome steel ball bearings, they are very hard, and therefore wear resistant. However, chrome steel is very difficult to solder, and I don’t have access to a spot welder, so glue was the obvious choice for attachment of the balls to the screws. I tried both JB Weld and super glue: 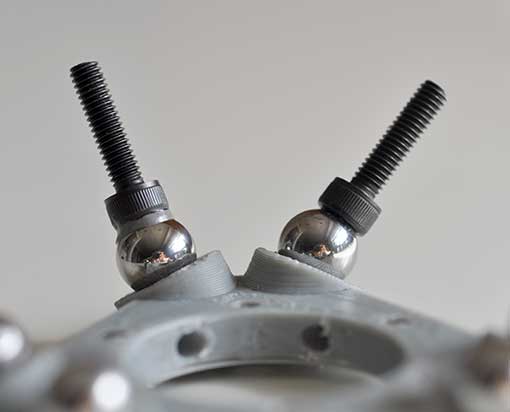 It was very convenient to glue the M4 hex head cap screws by simply first attaching the balls to the magnets. No clamping needed while the glue dried. I tested both for strength, and was not able to pull either of the screws off the balls by hand. Therefore, I decided to go with the super glue, because it’s easier to deal with since it dries in only a few minutes, rather than overnight, and there’s no messy mixing needed. In order to get a good bond, I first scuffed up the bolt head with some sandpaper. Then I cleaned both the bolt head and the steel ball with acetone before applying the super glue. After the glue dried, I tested the strength of each joint. 3 of them were weak enough that I could break the ball off, but after re-gluing them, they were just as strong as the others. Another advantage of using super glue was that it dissolves easily in acetone, so it was very to clean off the residual glue before re-gluing the failed joints.

Though it’s probably not needed, I am going to put tape between the balls and the magnets (note the tape under the leftmost ball): 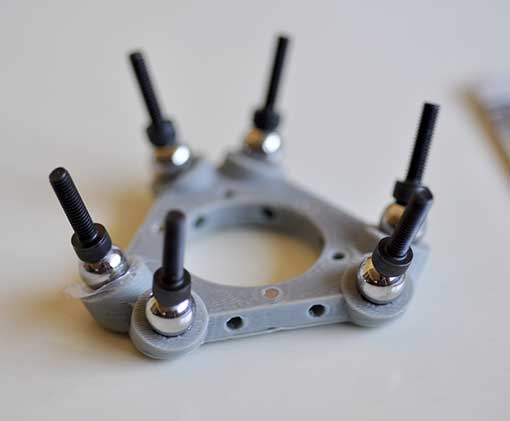 I bought some UHMW tape to try out, but it’s 7mil thick, and noticeably reduces the attraction between the ball and countersunk magnet. I’m thinking of trying out PTFE mouse tape next (it’s only about 2mil thick), but am afraid that it might be too soft, and wear down quickly. Surprisingly, regular old Scotch tape seems to work OK (it’s about 2mil thick),  so that’s another alternative to try.

For the arms, I’m using graphite strong wall rods from tridprinting.  The inner diameter of these tubes is conveniently, slightly smaller than my M4 cap screws. I used cutting wheel on a dremel with a flex shaft attachment to cut them down to size: 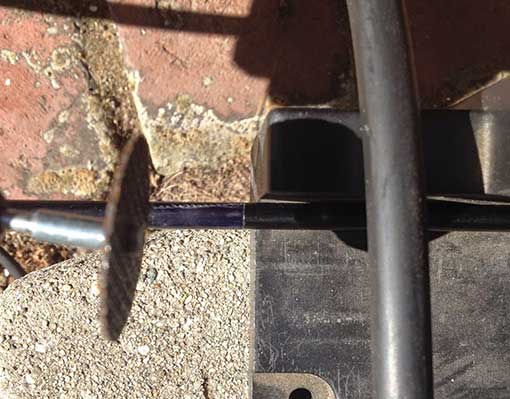 The flex shaft was necessary, because without it, I couldn’t cut perpendicularly to the tubing, since the cutting wheel is a smaller diameter than the dremel body. There are plenty of tutorials on how to cut carbon fiber tubes. The most important points are: 1) to put tape around the area of the cut to reduce splitting, and 2) to wear a mask to avoid inhaling the dust. To help prevent splitting when tapping out the holes for the M4 bolts, I printed out one of Ultibot’s excellent Delta Printer Arm Tap Jigs. The upper section was too long, so my tap couldn’t reach the rod, so I had to saw off a portion of it: 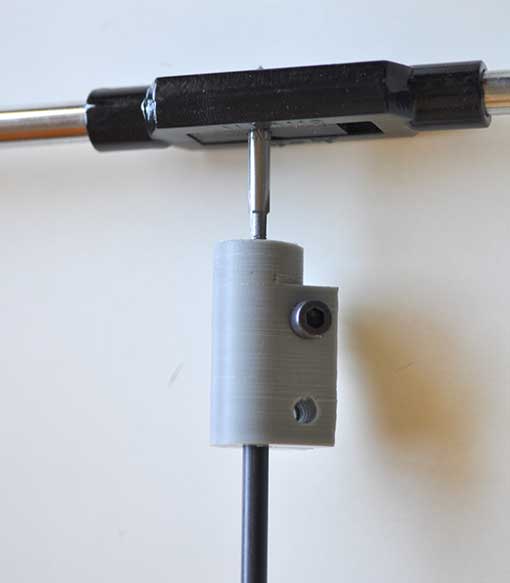 To get the rods all the same length, just put a few bolts onto a piece of 1515 extrusion to build an assembly jig: 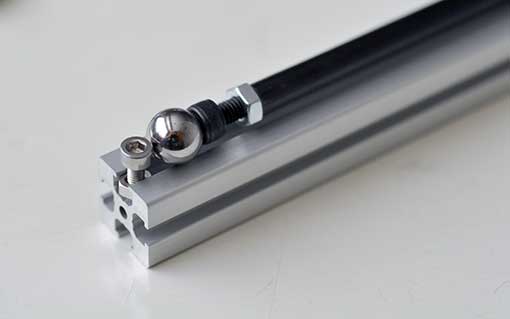 I didn’t end up using the nuts you see in the photos to lock the bolts, because in order to get them tight enough, they were putting too much pressure on the rods, causing them to split. Instead, I just dripped a drop of super glue into the junction of the rod & bolt. Loctite would probably be a better idea, but I didn’t have any handy. Below is my vertical carriage design: 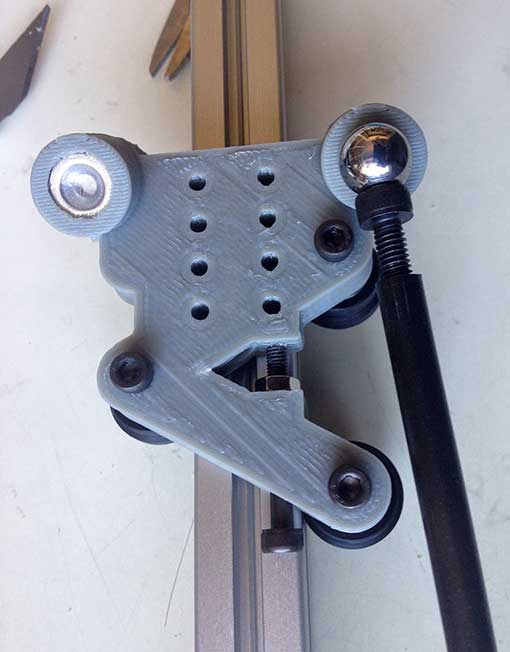 The vertical bolt running up the right side is the tensioner. I was delighted that the carriage appears to be rock solid. I was expecting to have to refine it a few times, but my first try seems to be pretty good. We’ll see once I get the printer up and running if I’m right. I bought the roller wheels from deltaprintr. 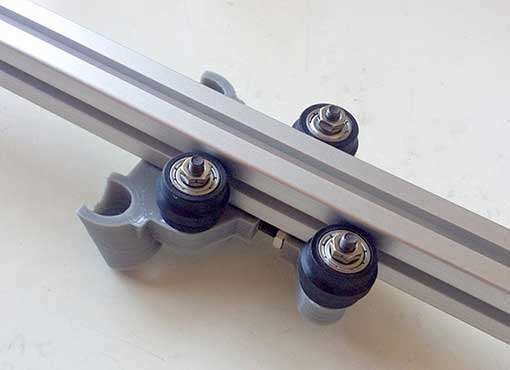 I am not entirely happy with the deltaprintr wheels for two reasons: 1) some of them have minor flat spots, so the movement isn’t perfectly smooth, and 2) there’s no internal shim between the bearings, to keep the lateral load off the ball bearings when you tighten them down (unlike makerslide wheels), so the bearings bind a bit when you try to tighten them down. Also, the bearings will wear out faster.

Note that the designs I described above are preliminary, because I am not yet finished building the printer. There are bound to be changes once I start testing it.

Update 2015-07-24: Unfortunately, I got bogged down by my fishing line drive, and was never able to get the machine calibrated. I got too busy to work on it, and it’s been gathering dust for the past year, unfortunately. The design files are all on YouMagine: https://www.youmagine.com/designs/kossel-linco