It infuriates me how so many WiFi routers are designed with inadequate cooling. I have a whole pile of routers that got flaky or crapped out after a few years due to overheating. The only ones that are still rock solid after years of continuous service are my WRT54Gs. My Linksys E4200 has been getting long in the tooth lately. On hot days, I need to blow a fan on it, and lately, even colder weather, it slows down to a crawl at random times and needs a reboot. I could try installing a big heatsink in it, but I thought maybe it was time for an upgrade to one of the fancier new technology routers. What most people don’t realize about the latest crop of router technology, such as AC3200, is that unless you upgrade your clients, you’re not going to get performance anywhere close to what these things can do. Most of the devices in my house are 2.4GHz 802.11n and can’t even handle MIMO, but smallnetbuilder had an article which showed that you can get a speed boost with 802.11n on a 802.11ac router. I figured I might as well future proof myself and look for a midrange AC router. 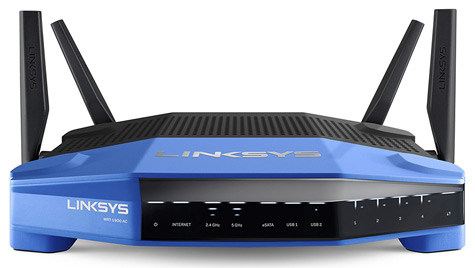 After lots of research on smallnetbuilder’s site, I settled on the Linksys WRT1900AC. This router, built by Belkin, is a nod to the venerable WRT54G, and is designed to be hacked with open source firmware. The specs are pretty good, even in the 2.4GHz band, which is often neglected these days, and I was particularly impressed with the speed of its NAS function, which vastly outperforms anything out there. It has a USB 3.0 port + a combo USB3.0/eSATA port on the back, and lightning fast storage performance. When I received it, I was impressed with the build quality. This thing is a beast! It looks like a WRT54G on steroids, and makes its predecessory look like a toy. Big & beefy and heavy. I specifically got the V1 because it has a built in cooling fan which kicks in only when necessary (which isn’t very frequent, due to its gigantic heatsinks). The later V2, also known as the WRT1200ACS, no longer has a fan. This is not going to be a full review of the WRT1900AC, but only a synopsis of my experiences trying to get decent 2.4GHz throughput out of it.

I really wanted to like the WRT1900AC. It is a thing of beauty, and I spent quite a few hours trying to tweak it, but to no avail. Despite the 90Mbps 2.4GHz LAN to WAN downlink throughput measured by smallnetbuilder, I was not able to get more than about 30Mbps downlink out of any of the devices in my house, even when sitting only a few feet from the WRT1900AC. This is only about half what I get out of my old E4200, which works as fast wirelessly as it does through Ethernet, maxing out at almost 60Mbps, which is the speed of my Time Warner cable service. No amount of tweaking over two days (about 6 hours of mucking with it) could speed up the 2.4GHz downlink performance. I scoured google for tweaks and even tried OpenWRT. I figured that I could figure out to get more speed out of it with OpenWRT’s tweakability, but it actually got slightly slower.

Although the speed with a very strong signal was only half as fast as my E4200, at the edges of my house, where the signal was weak, the WRT1900AC performed admirably, giving not only better throughput, but also being able to actually function at distances where the E4200 signal was completely dead. This left me in a dilemma, because the extended range is actually pretty useful to me. Also, for some reason, the storage performance came up quite short of what was tested by smallnetbuilder. I have a Seagate 2TB USB 3.0 drive, which is normally connected to a hacked Pogoplug E02 running Debian linux. The Pogoplug only supports USB 2.0, and doing a file copy across the network on Windows 8.1, I the maximum throughput I get is about 11MBps. Disappointingly, when attached directly to the USB 3.0 port on the WRT1900AC, the throughput topped out at a measly 4MBps. This was the last straw for me.

The 5GHz wireless performance on the other hand, was terrific. It easily saturated my 60Mbps downlink. But I can’t just switch to 5Ghz, because its range is too short in my house, and the signal drops out in some of my bedrooms. Also, not all of my devices support the 5GHz band. So, with a heavy heart, I decided to return the WRT1900AC. Just as I suspected, upgrading to the fancy 802.11ac router doesn’t necessarily help performance with 802.11n clients. In fact, looking at smallnetbuilder’s testing, lots of the latest and greatest routers put less emphasis on 2.4GHz performance, so if like me, you don’t have any 802.11ac clients, you should save your money and buy something cheaper. As for me, I’m going to try hacking a temperature-controlled fan into my old E4200, and see if that makes it more stable.